On Monday 24 September, GEM participants took part in a taster session to learn about the day to day running of Gloucestershire airport. Organised by GEM and Fly2Help, an aviation charity dedicated to bringing the enjoyment of flight to those who may not have had the opportunity to experience it, the day involved learning about the varied employment opportunities available at the airport and enjoying  a short flight in a small aircraft. The day was a great success, with all GEM participants enjoying the experience.

Another four participants attended the day to record the day for GEM publicity purposes and to utilise their marketing skills, from interviewing and reporting to photography and production of case studies after the event.

GEM participant Keith said that even though he had lots of experience of airports around the world, it was still interesting to learn about the workings of a smaller airport. Fellow participant Jon, who has previous experience flying gliders and light aircraft, wanted to learn more of airport operations and hopes to one day work in an airport.  Other participants also said they’d like to find employment in the airline industry.

Everyone who went up on a short flight loved the experience and the spectacular views, with some even having a chance to steer the aircraft for a short while. 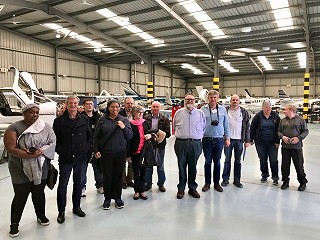